Two intriguing marketing promotions were launched last week, one in professional sports and one in the travel industry.

We begin with the New Jersey Nets.  The Nets have a long history of creative marketing (think fans in inflatable sumo gear colliding on court); and a former president, Jon Spoelstra, even wrote a book titled Marketing Outrageously, which by the way, I recommend.

The Nets are back at it again with a novel ticket offer that puts a new twist on the old high school reversible practice jersey but might give branding purists heartburn.  The Nets have created a dual-player reversible jersey as a ticket plan incentive.  One side will have a Nets player and other side will feature a star from the opposing team. So, two pro jerseys in one.

Fans need to buy two tickets per game for each of the 10 games in the Match-Up plan, which is a minimum investment of $350 per ticket, or $700 total. With that financial commitment, they get five jerseys, which are made by Adidas. 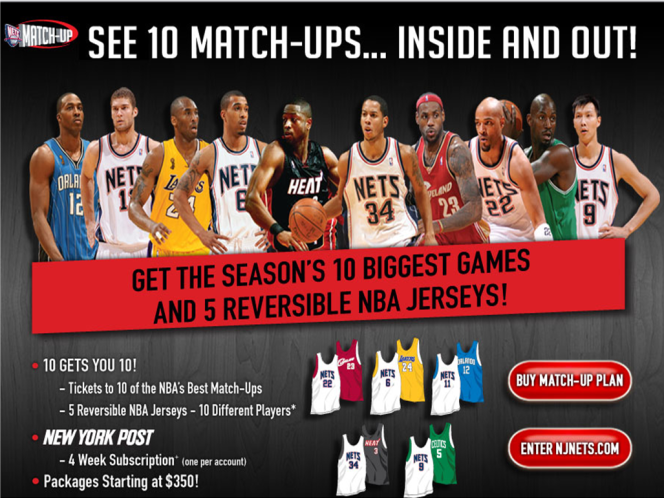 The 10 game package includes the Lakers, Cleveland Cavaliers, Miami Heat, Orlando Magic and Boston Celtics.  The jerseys will apparently feature stars from those teams:  Kobe Bryant, LeBron James, Dwyane Wade, Dwight Howard and Kevin Garnett on one side; with the jersey of the Nets’ player who will guard or “match-up” against that visiting star on the other side.

The Nets are a tough sell, especially in a market with so many entertainment options, and then throw in a recession.  They’re struggling both on and off the court and have never established a true identity in the New Jersey/New York market.  Complicating the ability to build/maintain the fan base is their plan to move the team to Brooklyn, if and when a new arena is built there. It’s no wonder they need to be creative.

“The NBA is a star-driven league and we want to give basketball fans the chance to see the best Match-Ups under one plan.  In giving out reversible jerseys that include NETS players and stars of opposing teams, we hope to encourage more basketball fans to see the NETS play against the league’s best players.  Part of the excitement of watching the NBA is not only rooting for your favorite team, but also to watch the league’s superstars.  With so many great players in the NBA, we look forward to an exciting atmosphere at our games this season.”

So, how to assess this new promotion? Well, the bottom line is to sell profitable tickets, and get fans into the arena to generate ancillary sales and profits. On this level, the promotion is great.  It reflects a probably accurate understanding of the state of the Nets brand and the interests of the fans in the market.  From a true branding level, it does give one pause (a single Nets jersey would be ideal but then the kids might be embarrassed to actually wear it to school!) – but sometimes pragmatism trumps pure marketing discipline.  Yormark, in a local radio interview, talked about being “open and honest with the fans.”  Maybe they didn’t have a choice, but this new ticket plan reflects reality and gives the Nets a fighting chance to put more fannies in the seats right now.  Getting them back may be another story.  After much thought, I give this promotion a thumbs up.

The other promotion that caught my attention is JetBlue Airways’ All-You-Can-Jet Pass.”  Everyone knows airline pricing is super competitive and equally difficult to figure out for consumers.  Instead of the typical price-point competition on a specific destination, the JetBlue team has devised a different approach.  Here’s how they explain it:

“Enjoy unlimited travel with our All-You-Can-Jet Pass!  For just $599* you can take JetBlue anywhere you like, as often as you like, from September 8 to October 8, 2009.  Use your All-You-Can-Jet Pass for business, for pleasure, to visit your favorite cities or to meet with a client.  You might as well just do it all! With more than 50 cities to choose from, and for just $599, it’s a deal you can’t pass up.”

Figuring out a new and different way to use pricing as a marketing tool is smart.  “All you can” offers are not new, but I don’t remember this approach used for air travel.  This is a clever idea, especially in a recession, although it may benefit frequent business travelers more than the average consumer.  A quick check shows that a round trip fare from Newark, NJ to Orlando, FL during the promotion period is $239.20 with taxes and fees, so if you can fly more than 2.5 round trips in a month you’re ahead of the game.  Another thumbs up.

First, don’t let pure marketing discipline get in the way of achieving business results.  Understand your reality and be pragmatic.  Would Nets management like to see everyone in the arena and people in local communities wearing Nets apparel?  Yes, but it’s not going to happen.  They realized that fans are coming to see their team and the opposing stars, and not necessarily in that order.  So they came up with a creative way to make the best of it.  Second, strive to find differentiating ways to market your products and services.  If you can get the end-user excited about your offer and switch his/her focus away from just a direct price comparison with the competition, even better.  With everyone surfing the Internet trying to find the best deal, airlines need to find a way to stand out.  JetBlue took the “all you can” concept and applied it to their business to create a competitive advantage and publicity opportunity.

One thought on “Promote This”