Everyone wants it, scores have written about it, many aspire to provide it, but few can actually produce it:  great leadership.

Whether you’re a fan or not, the leadership accomplishments of Duke University men’s basketball coach Mike Krzyzewski are outstanding and exemplary.  As Coach K and his team celebrate the 2010 NCAA basketball championship, I’d like to pause and share an important facet of Coach K’s leadership philosophy, which I first wrote about seven years ago.

Coach K’s concept of the “fist,” explained in his book “Leading With The Heart,” is wonderful:

This is great stuff.  But there’s more.  In a Final Four interview this past weekend, Chris Collins, Associate Head Coach and former player for Coach K, offered this insight: 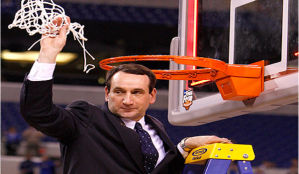 Krzyzewski’s on-the-court success is legendary, including four national titles and the 2008 Olympic gold medal for men’s basketball, yet his off-the-court results are also remarkable.  Besides authoring multiple books and driving extensive charity fundraising,  he’s an Executive-in-Residence at The Fuqua/Coach K Center on Leadership & Ethics (COLE).

Headline For Marketers:  The “x” factor that can differentiate superb business performance from mediocre is leadership.  The most valuable players have the ability to motivate, galvanize and inspire both the marketing team and cross-functional colleagues throughout the enterprise.  So, yes, make sure you have the right strategy, tactics and wherewithal to execute flawlessly.  But also make sure you have the strongest team and give the best leadership.  Finally, remember this call-to-action from my former Tate & Lyle colleague Ijones Constantino:  “We play as a team.  We play hard.”

One thought on “Championship Inspiration from Coach K”