Did you ever think you’d buy Craftsman tools at Costco?

Sears has been the exclusive home for Craftsman since 1927, with the highly regarded brand and Sears distribution channel forming a self-contained sales and marketing system.  No more.

Typically, retailers cultivate and use their own brands to help build and shape a distinctive brand equity, to establish a destination point-of-difference and to benefit from higher margin selling.  It hasn’t been common for retailers to market their private brands outside of their own distribution network.

There have been some exceptions, though.  When Eight O’Clock Coffee was owned by the A&P supermarket chain, some of the ground coffees were sold to select non-A&P retailers, with one important caveat:  only in geographic markets in which A&P did not operate.

Food retailer Safeway is an interesting example.  In 2006, the company created two high-level brands, O Organics and Eating Right, to leverage the organics boom and emerging wellness trends.  The brands were then put into the management custody of Safeway’s wholly owned subsidiary Lucerne Foods, who in addition to the Safeway store marketing, has marketed the products both domestically and overseas.  According to a 2009 news report, Lucerne was “heavily marketing” the ranges to domestic and international retailers. 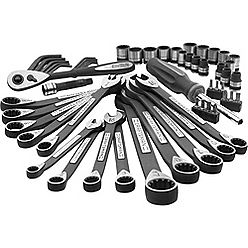 Now, in September 2011, Craftsman branded tools are being sold in Costco warehouses nationwide.  Sears is prioritizing the brand, and branded sales, ahead of driving traffic to its own stores.  Here’s what Sears Craftsman VP and General Manager, Kris Malkoski, told Sandra M. Jones of the Chicago Tribune:

“As we externalize the brand, we’re trying to be thoughtful about reaching shoppers we aren’t reaching at Sears today.  It’s an opportunity to bring the equity of this product to households that aren’t going to Sears.”

According to Malkoski, it’s the continuation of a strategy begun in Spring 2010, when for the first time in the brand’s eighty-four year history, it was available for sale outside Sears at 100 Ace Hardware stores.  That was expanded to 960 stores and is expected to reach 1,000 stores this September.

Jones, writing in the Chicago Tribune, made this cogent assessment of Sears’ strategy:

“Sears’ brand strategy runs counter to what most retailers are doing these days. Stores from Macy’s to Home Depot are expanding their in-house brands as a way to attract shoppers, stand out from competitors and pad their profit margins. Selling Sears’ proprietary brands through other retailers could raise cash in the short run but over time give shoppers fewer reasons to visit its stores and exacerbate the retailer’s decline, critics contend.”

And The Wall Street Journal, citing a LinkedIn job posting, reported that Sears is preparing to market its Kenmore brand externally as well.

Sears Holding Corporation, parent to Sears and Kmart, is not doing well financially (declining sales for five years), so maybe the company needs to try unique strategies.  The company has also done some licensing deals with its DieHard battery brand, per the Tribune’s Jones.

Craftsman, Kenmore and DieHard are strong, well-defined consumer brands.  Clearly, Sears Holding has been struggling to figure out how to maximize brand value and at the same time how to make it as a retailer.  The dilemma is that the brand assets themselves aren’t enough to power and sustain the retailer as a destination, and Sears isn’t strong enough to prosper as a retailer versus tough competitors.

One of the special Craftsman packages being sold at Costco is a drill packaged with a light for fixing hard-to-see spots under the kitchen sink.  Sears executives can only hope they can shine a light on a winning strategy going forward.

As you know from reading this blog, I’m a proponent of marketing experimentation and bold decision-making.  At least Sears is trying something different.  But the dilemma may just be that what’s good for the brands is not good for the stores.  Channel expansion for Sears’ big, power brands may be the right brand management choice, but how can that be the right retail growth management choice?

One thought on “The Brand Management-Retail Management Battle at Sears”

I write about business and marketing.

In each post, I share insights, observations & practical tips about marketing strategy and tactics. I tell you what I think, and why, based on what I know at a particular point in time.

I welcome your comments, even if you have a different point-of-view. Just keep them professional, constructive and clean if you want them approved.

I BEGGED to be cancelled, and failed. Where did I go wrong?