“I wish there was a book I could read that would tell me what to do.” (former brand management colleague)

As soon as I heard these words, I knew her days at our company were numbered.

They were, and it was a shame.  She was a new, junior marketer with an MBA from one of the best universities, and clearly a bright person.  At the same time, though, she was not cut out for the rough and tumble world of brand management, at least not in that company at that time.

One of the most prized business capabilities is being able to think on your feet, to take basic knowledge and principles and to be able to apply them in new and challenging situations.  As my former colleague learned, magic instructions rarely exist.  Notwithstanding training and coaching, you’ve got to figure it out!

The challenge is how to develop these capabilities. 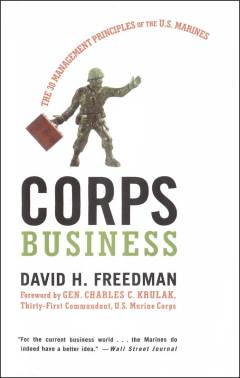 There’s much good learning from the book Corps Business: The 30 Management Principles of the U.S. Marines (David H. Freedman).  It’s an easy read and contains excellent lessons and/or reminders for marketers and business leaders.

Consider this.  If you were given an inside opportunity to learn from this company, wouldn’t you want to?

I’ve previously written about Principle 1, Aim for the 70-Percent Solution:  “It’s better to decide quickly on an imperfect plan than to roll out a perfect plan when it’s too late.”

You can learn all 30 principles and more in the book.

In the meantime, I’ve organized 8 Key Nuggets and highlighted 3 More Principles that particularly resonated for me.

“No matter how good the Marines get at any aspect of their mission, they never consider themselves to have reached a pinnacle.  They always suspect that somehow there’s a better way to do things.”

2.  Foster a Climate of Action

“But it does want its people to be bold – that is, to take initiative and, when in doubt, to act rather than mull things over while critical events are unfolding.”

3.  Apply Knowledge and Think on Your Feet

“The challenges you face tomorrow will not be the same ones you face today, so don’t get stuck on a particular set of strategies and tactics.”

“The Marines have emphasized a simple, Darwinian test as part of determining an officer’s suitability for promotion: Is he or she someone who inspires people to follow?”

“Subordinates should feel free to openly disagree with their managers, up until it comes time to carry out a final and legitimate decision.”  (Principle 18)

“Don’t just tell me what’s broken, tell me how to fix it.”

7.  End Up at the Right Place with Good Directions

“The essence of the Marine style of giving direction is to avoid telling someone exactly how to do things when giving orders.  Instead, Marine officers provide two clear statements; first, how they would like the situation to end up, what the Marines refer to as “the end state;” and second, the broader goals that they would like to achieve through the entire unit’s actions, information that Marines call “the commander’s intent.”” (Principle 13:  Manage by end state and intent.)

“There are always medals and awards you can give out.  But what these people want is day-to-day recognition in front of their peers.  It doesn’t cost you anything to stroke your people in public.  And it doesn’t have to be anything big.  It can just be, ‘You did a nice job on night watch.  Thank you; I noticed.'” (quote from unnamed commander)

“Controlling the pace of competition can exhaust and demoralize the competition.” (Principle 24)

10.  Be Smarter Than Your Opponent

“Marines don’t look for a fair, head-to-head fight; they try to put the fix in.  That means coming up with tactical plans for a battle in which they can draw on their strengths while robbing the enemy of the opportunity to draw on its own.”

“Even the most successful organization will eventually stop winning if it doesn’t explore radically new approaches.”  (Principle 27)

You don’t have to join the Marine Corps to get their best teaching on leadership and decision-making for the business crucible.  Just read David H. Freedman’s Corps Business: The 30 Management Principles of the U.S. Marines.  The push-ups are optional!

One thought on “What the Marines Can Teach Business Leaders”