There’s much more to know about General Stanley McChrystal than what happened with Rolling Stone magazine.

Granting inside access to a journalist turned out to be a disaster, and the magazine essay led to the end of his military career. But don’t let what happened in 2010 diminish the superb business advice General Stanley McChrystal offers in his book. 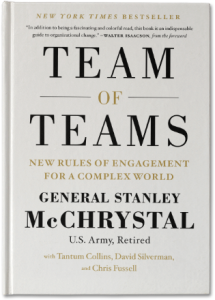 In “Team of Teams – New Rules of Engagement for a Complex World,” the retired 4-star general and his colleague writers share ready-to-implement ideas on  leadership, teamwork and organizational effectiveness.

The book’s origins come from McChrystal’s leadership of the Joint Special Operations Task Force and the efforts to defeat Al Qaeda in Iraq. It’s an easy read, and one I recommend.

To get you started, I’ve organized five salient points that I particularly like and believe to be effective.

Think about how you can adapt and implement some of these ideas in your organization today.

1. Foster a Holistic, 360 Degree Understanding Across the Organization

“We didn’t need every member of the Task Force to know everyone else; we just needed everyone to know someone on every team, so that when they thought about, or had to work with, the unit that bunked next door or their intelligence counterparts in D.C., they envisioned a friendly face rather than a competitive rival.”

To do this, McChrystal advocates what he calls “shared consciousness,” building trust, communicating purpose, and sharing information.

“We wanted to fuse generalized awareness with specialized expertise. Our entire force needed to share a fundamental, holistic understanding of the operating environment and of our own organization, and we also needed to preserve each team’s distinct skill sets.”

2. Be Prepared for the Unexpected and Unknown

“Managers accept the reality that they will inevitably confront unpredicted threats; rather than erecting, strong, specialized defenses, they create systems that aim to roll with the punches, or even benefit from them. Resilient systems are those that can encounter unforeseen threats, and when necessary, put themselves back together again.”

“The daily O&I briefing lay at the core of our transformation: this pumped information about the entire scope of our operations out to all members of the Task Force and partner agencies, and also offered everyone the chance to contribute.”

“We designed prepackaged communication bundles that our teams could take into the field, wherever they were in the world.” Eventually, “any of the partners we invited could dial in to the O&I securely from their laptops and listen through their headphones.”

“The meeting ran six days a week and was never cancelled.”

McChrystal stresses the importance of asking the right questions to the team, for example: “What do you need?”

Obviously, you’re not going to do this daily or to such an extent, but develop ways to apply at least some version to your organization.

“The term “empowerment” gets thrown around a great deal in the management world, but the truth is that simply taking off the constraints is a dangerous move. It should be done only if the recipients of newfound authority have the necessary sense of perspective to act on it wisely.”

As part of developing that perspective across the team-at-large, McChrystal recommends the process of “thinking out loud.” He explains that when a leader does this, it enables the team to follow his/her train of thought and even offer corrections where needed.

Included with this approach, the general suggests that the leader can stop and ask subordinates what action is appropriate and what would be his/her plan of action.

Further, McChrystal notes that his being able to say “‘I don’t know’ was accepted, even appreciated.” And, “asking for opinions and advice showed respect.”

5. Good Action is Better than Perfect Inaction: The 70% solution